Back in the Saddle Again....

I took a bit of a break from this blog for several reasons. Some of it had to do with moving on to a new day job that doesn't have the flexibility of my old job. When you work for the State, you gotta follow the rules. Plus I have not given up my old job so the remaining time not at the day job gets filled with my other projects and I still have to balance the family life. Result: stuff like this gets but waaay back on the "to do" list. On the RV todo list was installing the air shocks on the front springs. Done!! That was about 2 hours of cutting, pulling, pushing and inflating. Boy, do they make a difference! I run them at about 70 psi.

Well, the family did manage to pull off a Week-after-Memorial Day vacation trip to the 1000 Islands to a KOA located on Association Island. It was a YMCA camp in the '50's and then somehow became a KOA campground. Many of the old buildings are still there including one BIG barn building they call the "Town Hall".

The water level on Lake Ontario is very high and expected to only crest sometime in later June. From what I saw, there is about another 12"-18" of rise this place can take before things like the marina and septic systems will become non-functional. Hope that the water level drops down and they can get back to normal!!
We took the scenic route from our home up to 104 East up through Oswego and then up Route 3 to Henderson, NY. Three days there (Saturday, Sunday and part of Monday) and it rained for about half the time but we managed to get some good times in with campfire dogs and smores the first evening (after the wind died down! Wow that was something!). Saturday was grey but ok and that night we tested out the roof with the major downpours and thunderstorms late that night! Sunday was a mix of drizzle and such but you could get out and explore. 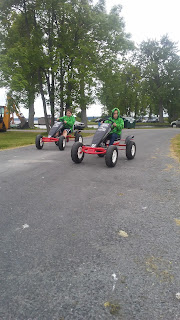 The drive up was in high winds and the Allegro certainly is a bit of a challenge driving and staying on track in that kind of situation! The last part was an exciting drive on the narrow causeway to the island. We got about 5.1 mpg with the generator running the entire time (lots of hills and not much highway traffic). On the way back we took 81 south to the Thruway back home and got almost 7 mpg with the generator ( and major rainstorms!). 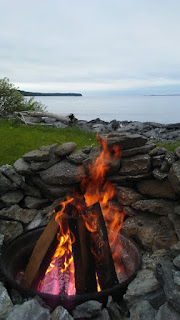 We hope to get the water pump replaced and get the plumbing all up and running the next trip but pretty much everything else worked just fine! Until the next trip this spring/summer!